What are some of the common diseases and health conditions of pet chinchillas? 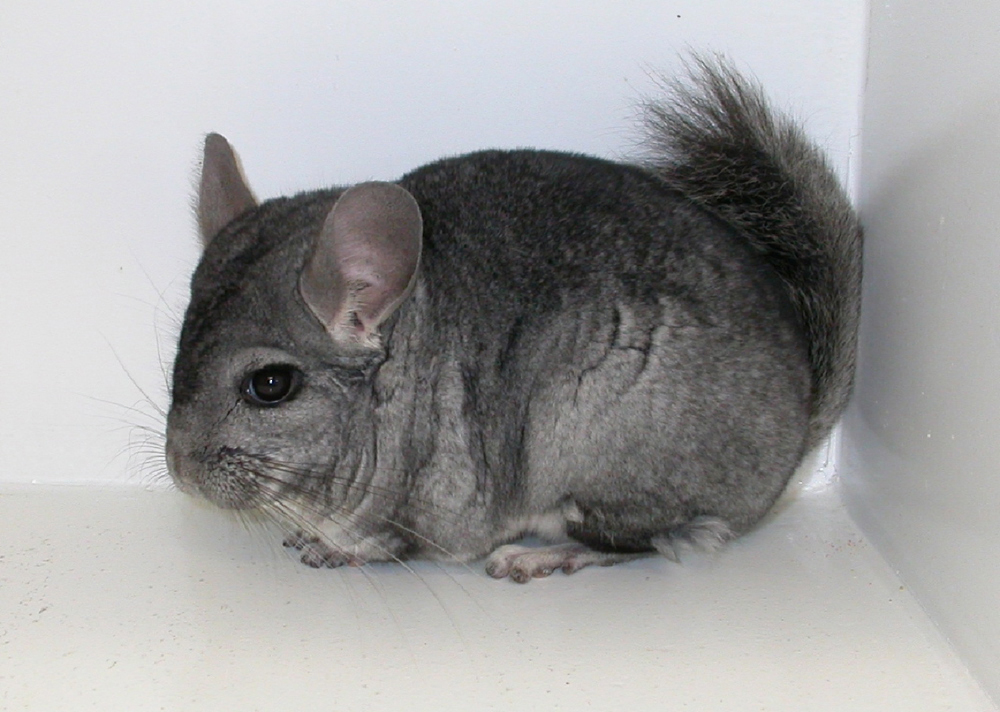 What are the signs of these conditions?

Bite wounds are common in chinchillas that are housed with other chinchillas. They can also occur as a result of an attack by the household cat or dog. Because of their dense fur, skin wounds are often missed. Dog bites can be fatal to chinchillas due to the degree of damage a large dog can do to a small, fragile chinchilla. Bites by other chinchillas, dogs, and cats are often infected with various bacteria, especially Pasteurella multocida, a bacteria that commonly lives in cats’ and dogs’ mouths. If left untreated, the infection in the wound can easily spread throughout the body and kill a chinchilla.

Respiratory diseases are often seen in pet chinchillas. A relatively minor respiratory problem that is left untreated can rapidly progress to pneumonia, which can be fatal. Conditions such as overcrowding, poor ventilation, and high humidity may predispose to pneumonia. Common signs of respiratory disease in chinchillas include lack of appetite, lethargy, difficulty in breathing, nasal or eye discharge, and swollen lymph nodes.

As is true with many rodents, overgrown and impacted teeth are common in chinchillas. Chinchillas have open rooted or continuously growing teeth that grow 5 - 7.5 cm (2 -3 inches) per year. The teeth must align or meet properly in order to wear properly against each other. Malocclusion occurs when the teeth do not meet properly and therefore do not wear correctly, leading to overgrown teeth. This can happen with the front teeth (incisors) that are visible, and the back molars that you cannot see. These overgrown teeth may start to cut the tongue, cheek, or lips leading to difficulty eating, a decreased appetite, weight loss, drooling ('slobbers'), eye problems, and pawing at the face. Chinchillas can also get deep tooth root infections.

Teeth overgrowth also happens commonly in chinchillas that do not eat hay as the main component in their diet. Hay is essential to chinchillas not only to maintain a healthy gastrointestinal tract, but also to help grind down continuously growing teeth. Chinchillas that do not eat hay, do not wear down their teeth properly, and the surfaces of their top and bottom back teeth (premolars and molars) then hit each other inside of their mouths. Once these teeth hit each other, they have no further room to grow, so the roots of these teeth then become impacted in their jaws from the pressure of the top and bottom teeth hitting each other. Typically, all or nearly all the back teeth become impacted over time, resulting in a great deal of pain when the chinchilla initially tries to chew any hard food, and ultimately any food at all.

"Anesthesia is often needed to allow a thorough evaluation of the mouth, and X-rays of the skull may be needed to identify problems."

If you suspect problems with your chinchilla's teeth, you should immediately seek help from a veterinarian familiar with chinchillas. Anesthesia is often needed to allow a thorough evaluation of the mouth, and X-rays of the skull may be needed to identify problems. Infected teeth need to be removed, sharp spurs on the surfaces of the teeth need to be trimmed, and anti-inflammatory medication should be given for pain. Dental disease is generally chronic in chinchillas and can be very difficult to manage.

"Overgrown teeth are common in chinchillas."

Gastrointestinal (GI) stasis refers to a slowing down of the passage of food through the GI tract when chinchillas stop eating for any number of reasons, including dental disease, inappropriate diet, overheating, or any other stress. Once the animal stops eating, the normal population of bacteria that inhabit the GI tract, breaking down food, changes, and often toxin- and gas-producing bacteria overgrow, making the animal even more uncomfortable. Regardless of why the pet stopped eating, GI stasis is a potentially life-threatening condition that must be treated by a veterinarian as soon as possible.

In addition to GI stasis, chinchillas are prone to the development of bloat, or the accumulation of large amounts of gas in the stomach and intestines. Bloat can be secondary to GI inflammation, alteration in the normal bacteria in the GI tract (dysbiosis), GI stasis, or in rare cases, intestinal obstruction or torsion (twist of the GI tract). Affected chinchillas have distended, sometimes painful abdomens, and they may be weak and laying on their sides. With severe bloat, they may have difficulty breathing.

In addition to GI stasis and bloat, chinchillas sometimes also develop diarrhea. Diarrhea is not a disease but rather a sign of disease. Rodents, have digestive systems that are designed to digest large amounts of fiber, easily develop diarrhea due to diet changes, incorrect usage of antibiotics, stress, and diets low in fiber or high in fat, carbohydrates and protein. Veterinarians will determine the cause of diarrhea after evaluating the diet, conducting diagnostic tests, including microscopic examination of the stool, fecal cultures, X-rays, blood tests, or in some cases, exploratory surgery.

Chinchillas also are susceptible to numerous skin and fur problems such as fungal infections (ringworm), fur chewing, hair loss, and an unusual problem in which the fur becomes wrapped around the penis in a 'ring' leading to irritation or constriction of the penis.

"Chinchillas DO NOT tolerate humid conditions at all."

Heat stroke is a common problem in chinchillas. As native inhabitants of the high Andes mountains, they are very comfortable at temperatures of 35o - 45oF (2o - 7oC). Optimal environmental household temperature should be 55º - 68ºF (10º - 20ºC) and definitely below 80ºF (27ºC). High humidity should also be avoided, as chinchillas DO NOT tolerate humid conditions at all. Temperatures above 80oF (27oC), especially if high humidity is also present, can easily lead to fatal heat stroke. Signs of heat stroke are similar to those seen in any pet with this problem, including panting, high body temperature, open-mouth breathing, and reluctance to move.

How are these conditions and diseases treated?

Bite wounds in chinchillas from other animals may be infected with one or more of several different types of bacteria and can be fatal very quickly. Bite wounds are true medical emergencies that require immediate veterinary attention. Bite wounds are treated with appropriate antibiotics, as well as thorough wound cleaning (for which anesthesia may be necessary).

Pneumonia and other respiratory problems are treated with antibiotics. Chinchillas that are lethargic and have stopped eating require aggressive therapy in the hospital, as well as fluid therapy and force-feeding.

Overgrown and impacted teeth should be trimmed by your veterinarian. Anesthesia is often necessary to prevent injury to the chinchilla. In the past, nail trimmers were used to trim overgrown teeth. However, due to the chance of injury to the teeth and the jaws, most veterinarians now trim the teeth using a dental drill which is designed to cut through teeth without injuring them or the surrounding gums. For teeth that are impacted but not infected or loose, long term anti-inflammatory medication, as well as soft food, is generally indicated.

Treatment of GI stasis includes fluids (generally administered subcutaneously or intravenously), syringe feeding, pain relievers, and GI motility enhancing drugs, as long as there is no physical GI tract obstruction. In addition, the cause of GI stasis (i.e., dental disease, overheating, stress, etc.) must be identified and treated. Treatment of bloat is generally supportive and similar to GI stasis, except in severe cases in which a tube is passed through the mouth into the stomach to relieve gas pressure. Prognosis is poor with severe bloat. The correct treatment for diarrhea depends upon the cause. Parasites are treated with the appropriate deworming medication. Bacterial infections are treated with antibiotics. An inappropriate diet is corrected by switching to a more appropriate, higher fiber diet.

Heat stroke is an emergency condition requiring immediate veterinary treatment. The chinchilla is immediately cooled with tepid (not ice-cold) water baths, cool water enemas, various medications, intraperitoneal fluids (fluids placed directly into the abdominal cavity), and intravenous fluid therapy. Care must be taken as to not chill the animal too much, as a rapid body temperature drop could kill the pet.

Chinchillas that are discovered with heat stroke at home should be sponged down with tepid (but not cold) water, cooled with a fan, and brought to the veterinary hospital as soon as possible.

"NEVER give your pet chinchilla a human medication such as AspirinTM or TylenolTM as these medications could kill your pet."

Alcohol applied to the chinchilla's skin actually decreases the loss of heat from the body and is not recommended. NEVER give your pet chinchilla a human medication such as AspirinTM or TylenolTM as these medications could kill your pet.

How can I tell if my chinchilla is sick?

Certain signs of disease in chinchillas are specific for certain diseases. Unfortunately, clinical signs are often vague and non-specific, such as a chinchilla with anorexia (lack of appetite) and lethargy, which can be seen with many diseases including pneumonia, overgrown/impacted teeth, cancer, and even kidney or liver failure. ANY deviation of your chinchilla’s behavior from normal should be a cause for concern and requires immediate evaluation by your veterinarian.

© Copyright 2017 LifeLearn Inc. Used and/or modified with permission under license.

Outside of office hours or on holidays, please contact or visit one of the nearby 24-hour emergency hospitals: